Skip to content
Jan 26 Australia Day
I arrived safely in SD on Monday after good flights. As soon as I checked into my hotel I caught the bus to All SS, to collect my green card & other mail. I was quite tired, so went to bed before 8 pm. Next morning I got my usual $5 haircut at the SD Barbers College. At 1 pm I caught the bus to the airport. First thing was to get my new green card registered for Global Entry. This is the government programme which allows me easy & fast entry into the USA. After an hour wait it only took 5 mins. Then it was over to United Airlines to have the card registered on my profile. Since the old card expired last July I have not been able to check in online when flying into the US. So now the 2 great perks of my green card have been restored. I felt very satisfied 🙂
On Wed I flew to New Orleans. I have loved visiting this city ever since my 1st visit in 1991. Thursday it was sunny, but chilly, & I enjoyed walking around the French 1/4ter. In the evening I celebrated Australia Day by going to a typical American steak house!
Thurs Feb 1
After my visit to NO I flew all the way to Guam (via LAX & Tokyo!). This tropical island has fascinated me since a stopover between Cairns & Hawaii in 2000 & it did not disappoint. I have had a nice relaxing time – the ocean & beaches are beautiful. It was very humid during the day, but I still did lots of walking. 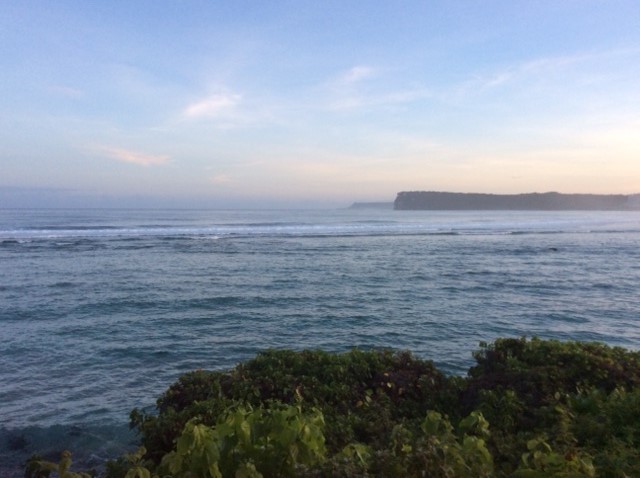 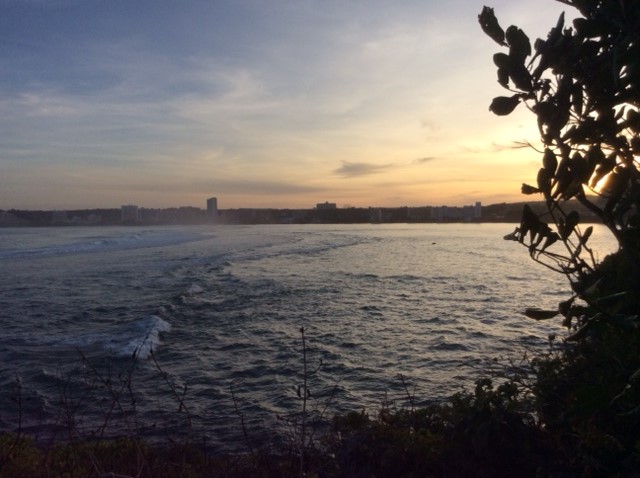 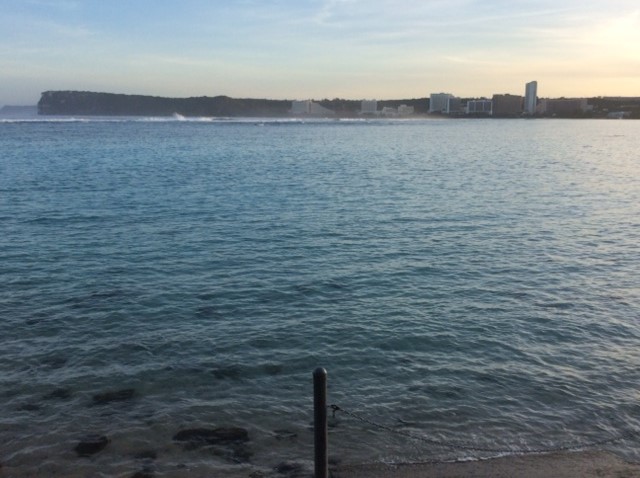 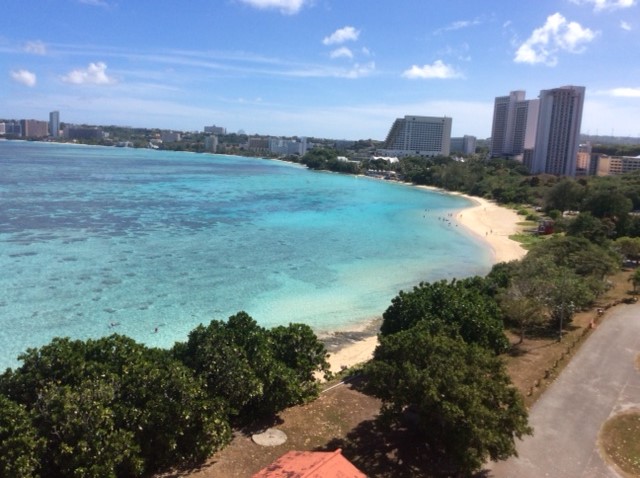 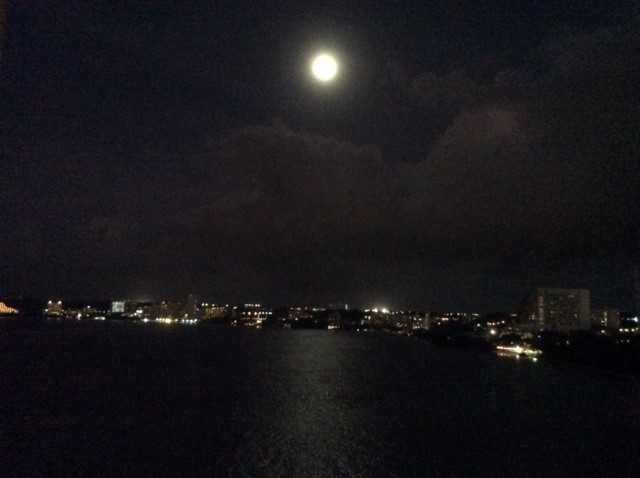 I fly back to SD today. Tomorrow is the 38th anniversary of my ordination to the priesthood & I will be saying Mass at All SS. Not a big celebration, but a few friends will attend to make it a happy celebration.
Mon 5
The Mass on Friday was a nice celebration, with 24 in attendance. It was lovely to say the Mass in the beautiful Lady Chapel, where I said Daily Mass for 7.5 years as Rector of All SS.
I am now in Honolulu, enjoying a few relaxing days before flying to London. I first came here in 1986 & loved it. I met some nice people & experienced American hospitality – so when I returned to Melbourne I said to myself, “If that’s what they’re like in Hawaii, what must they be like on the mainland!”. Thus began my American adventure 🙂
Sun 11
I arrived in London on Friday. Checked into the Bankside Hilton – the hotel which has become my London home – & was welcomed back by everyone, from the Manager to the servers in the Exec Lounge. I was very tired – only got 3 hours sleep on the plane – fell asleep watching the Winter Olympics, woke up at 1 am & after 2 hours reading eventually slept until 8 am.
Saturday I planned to go for a walk, but after I set out it started to rain. It was also very cold. I remembered to bring my gloves, but forgot my beanie & scarf! So I spent the a/noon in my hotel room. On Sunday I went to High Mass at St Magnus the Martyr. It is only a 20 min walk from the hotel & has become my preferred church in London. Good music, excellent preaching & nice brunch afterwards 🙂
After Mass I went for a walk around the City. The City of London is the financial hub of London & therefore quiet on Sundays. Most of the churches are closed & the footpaths almost deserted. I don’t get to this part of London much, so enjoyed looking at the buildings at my leisure.
Tomorrow I catch the train to Norwich, then the bus to Walsingham. I am there a week & will be preaching at St Mary’s Parish Church next Sunday.
Sun 18
I have had an excellent week at Walsingham. It is good to be back. Said Mass in the shrine Tuesday, with many people & intentions prayed for, as well as candles lit. The Partnership Weekend was really good. Great to catch up with many old friends. This morning I preached at the Parish Mass & received many favourable comments afterwards. Tomorrow I catch the train back to London.
Thurs 22
Yesterday I flew to Munich. As the plane came in I was treated to a delightful view of the land covered with snow & villages poking up thru it. And when I came out of the airport it was freezing! Today I visited Augsburg, 50 mins from Munich. The train journey passed thru wonderful snow-covered fields, trees & towns. Augsburg is a very significant & historical city. It was very cold walking around & I was glad to spend time in 4 churches, incl the impressive Dom. Tomorrow I catch the train to Berlin. 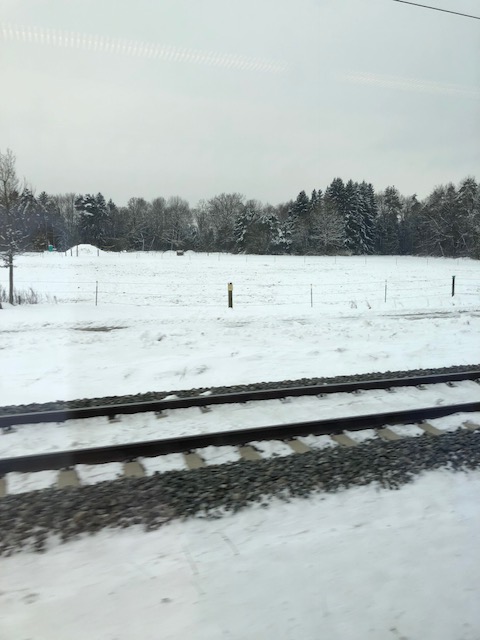 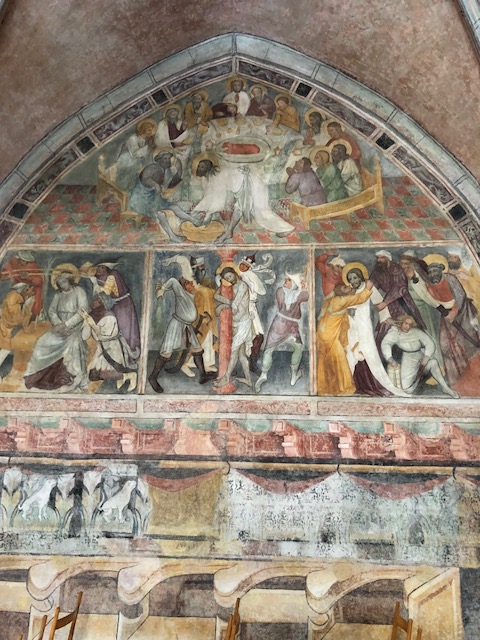 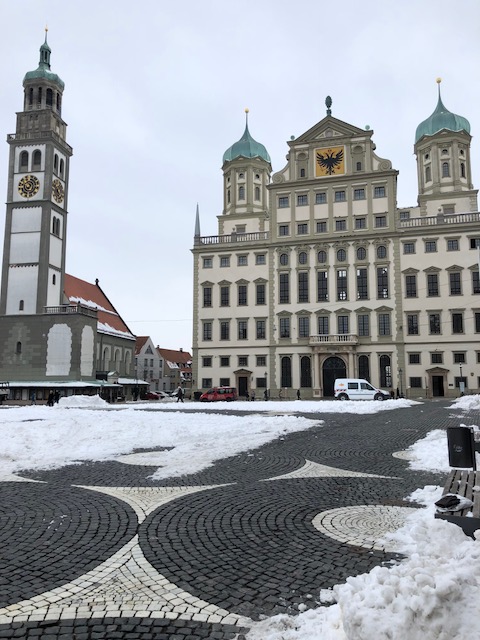 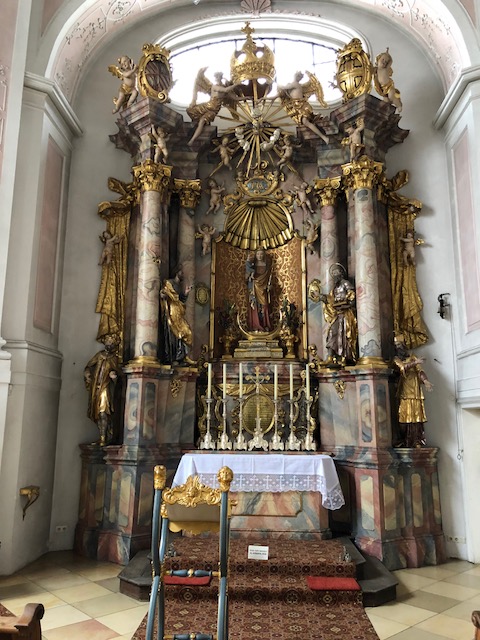 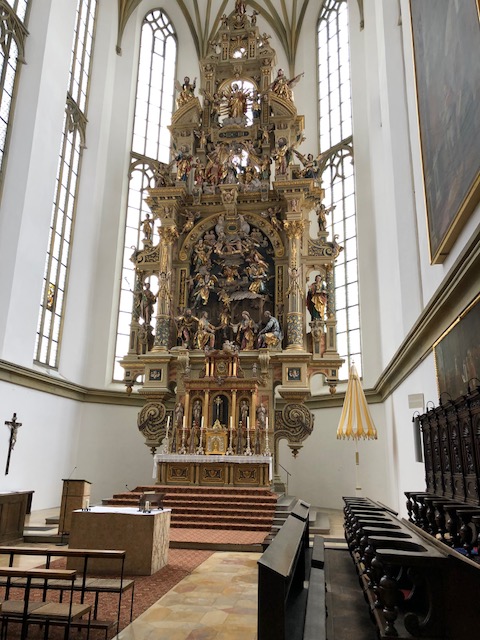 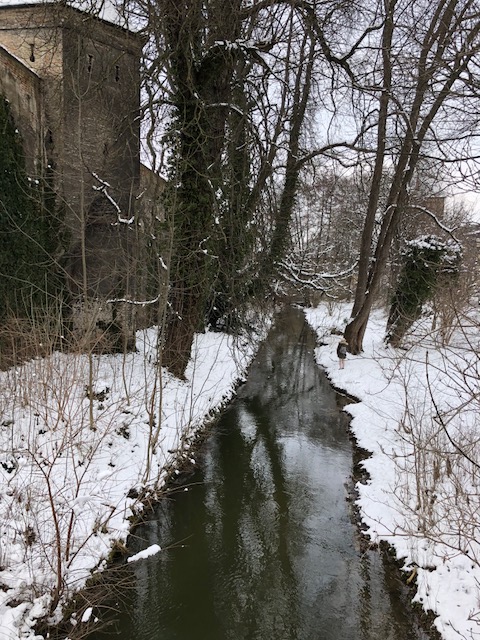 Wed 28
I had a relaxing w/e in Berlin. The weather continued to be very cold, so I only walked around in 1 hour slots, then retreated back to the hotel. I have seen/visited most places I have wanted to since I retired. Now I enjoy walking around, observing things being constructed/renovated. For several years I have noticed the reconstruction of the Staats Oper, next to St Hedwig’s cathedral. To my delight, I noticed that the renovations are complete & it is now reopened. So Sunday a/noon I celebrated by getting a last minute ticket for Wagner’s Tristan & Isolde. The opera house is a marvellous renovation. The opera was musically wonderful – but it was a modern production, which I do not like! 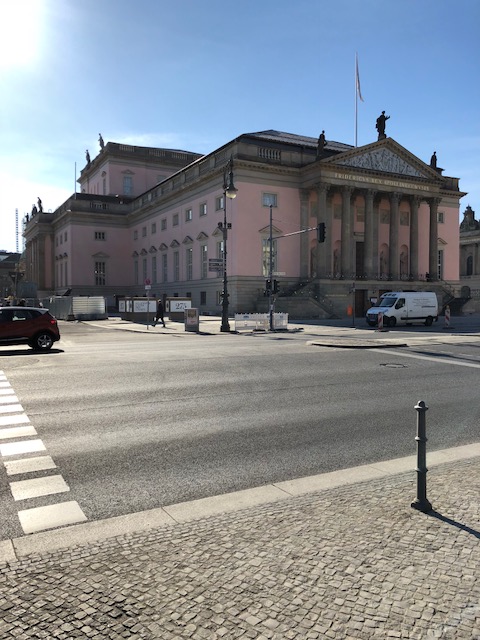 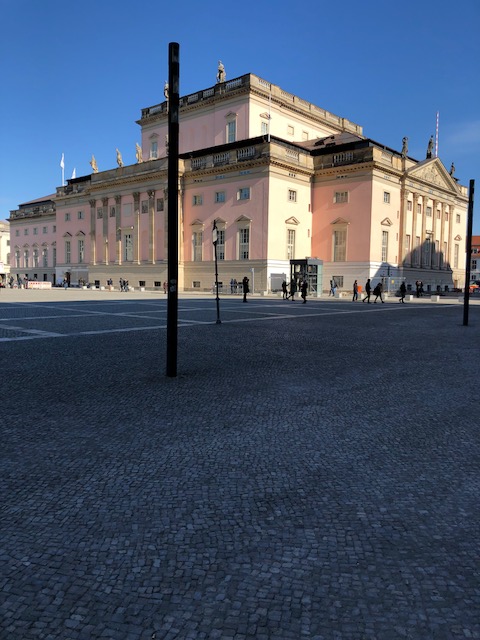 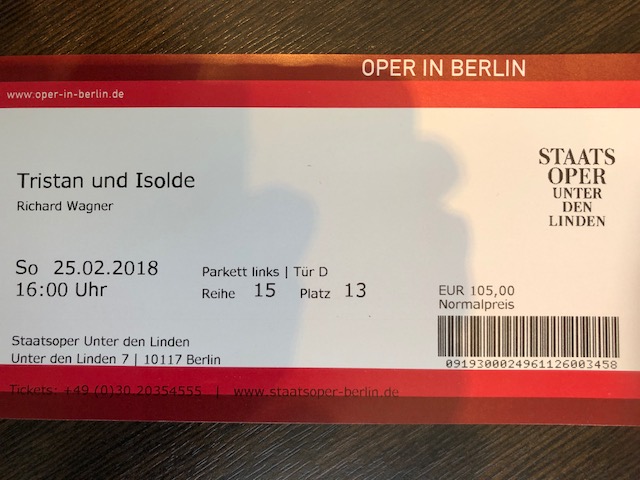 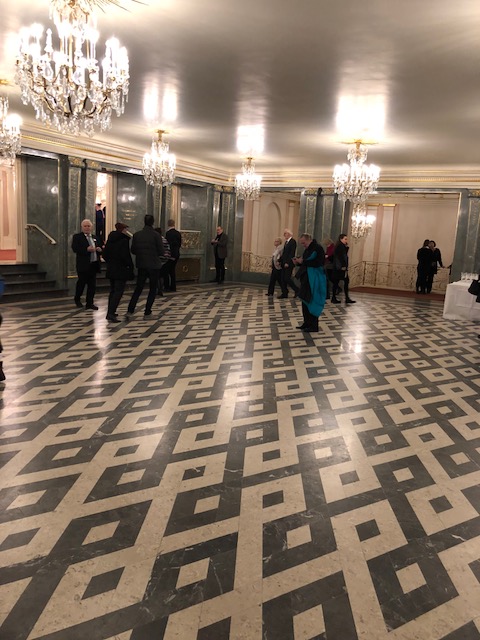 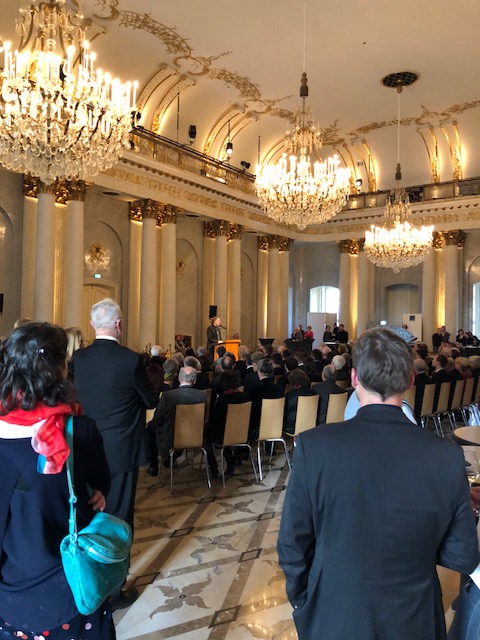 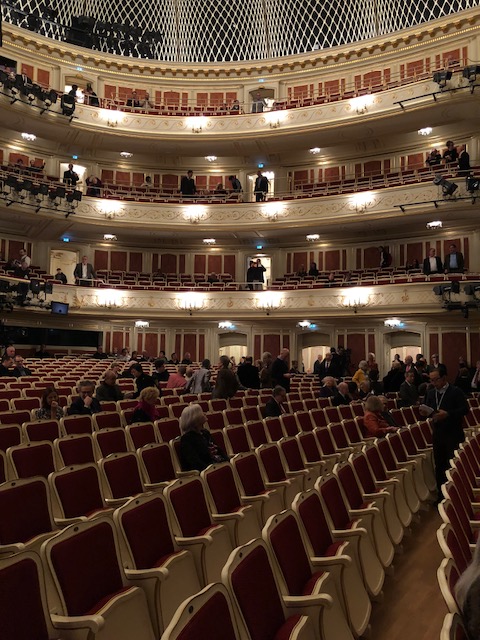 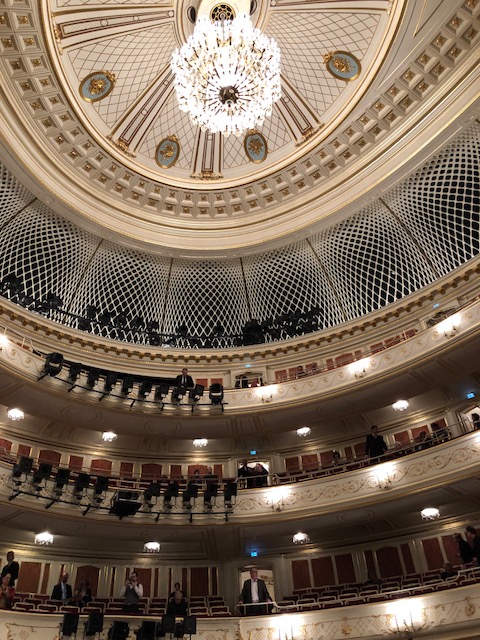 On Monday I caught the train to Bonn. I had several places nearby I wanted to see – but it was so cold I settled for a 24 hour transport & museum pass. Firstly I caught the subway to Konigswinter. My destination was Drachenfels – a very high peak on the Rhein where there is a ruined fortress & a 19th cent Schloss. I caught the old tram which goes up the mountain. Being winter, there was snow everywhere & hardly anyone at the top. Magnificent views. I walked down to the Schloss. It has an interesting history & like many other buildings, was taken over by the Nazis.
Wiesbaden 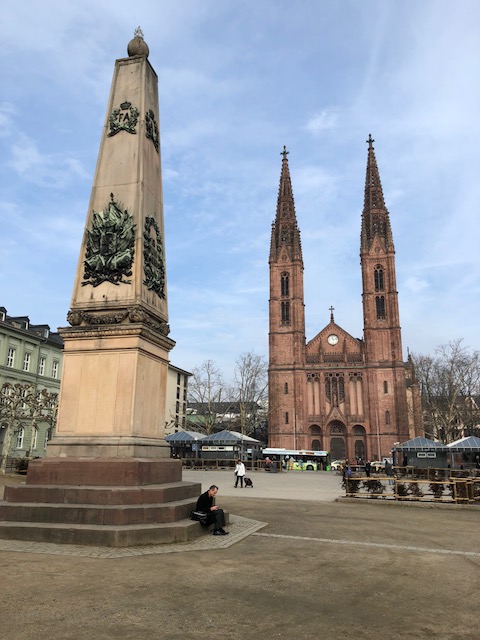 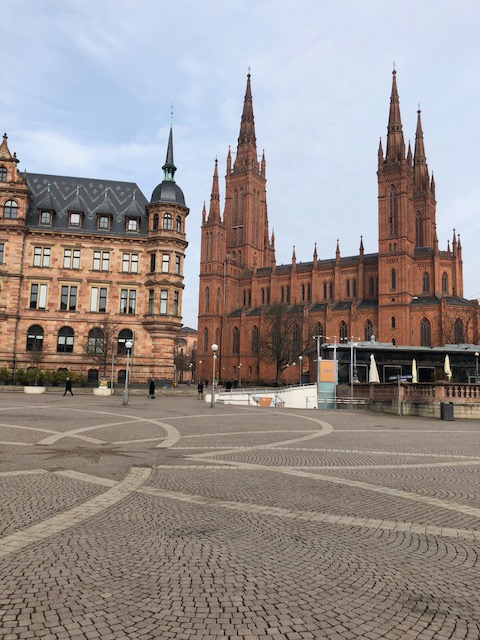 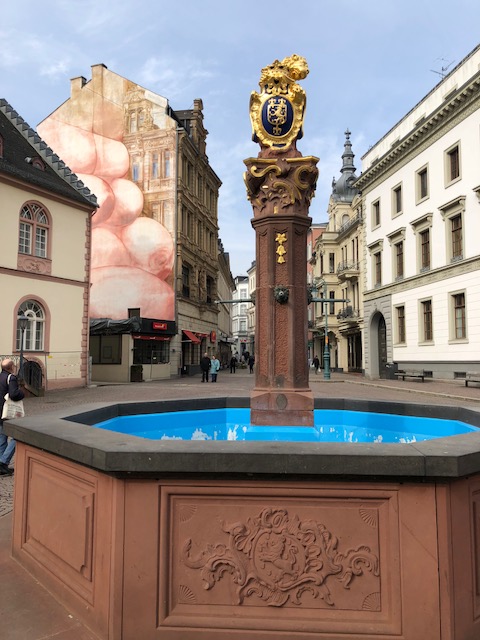 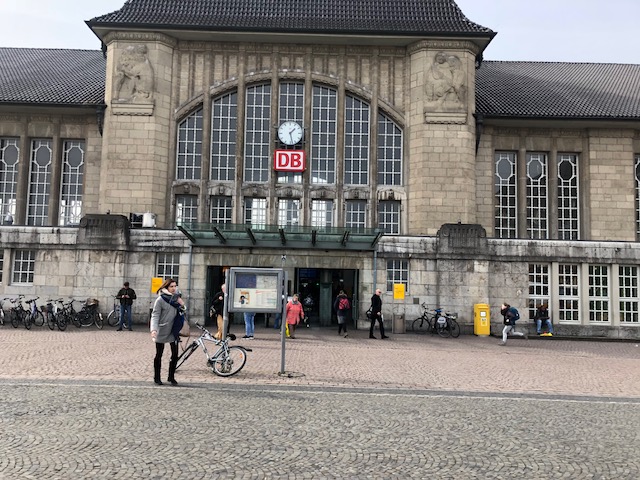 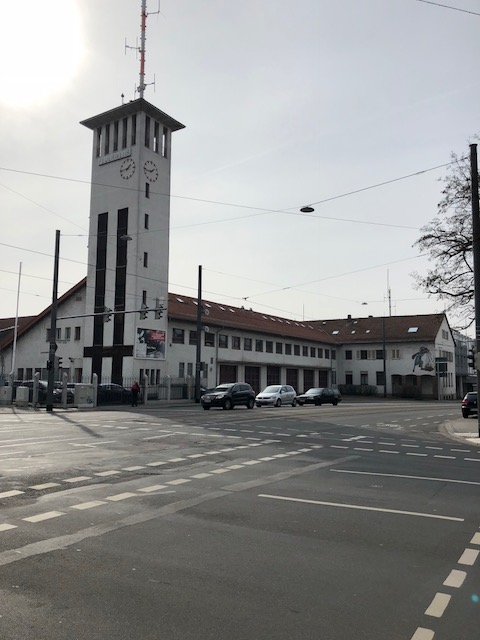 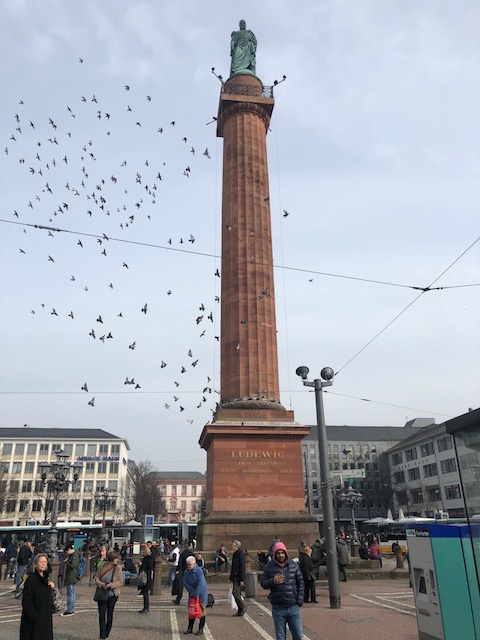 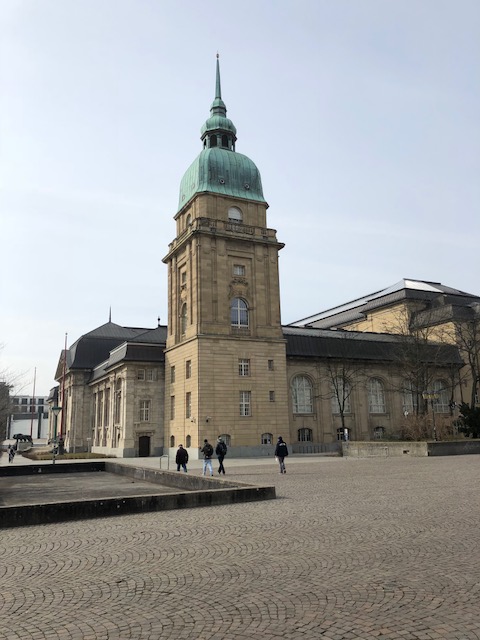 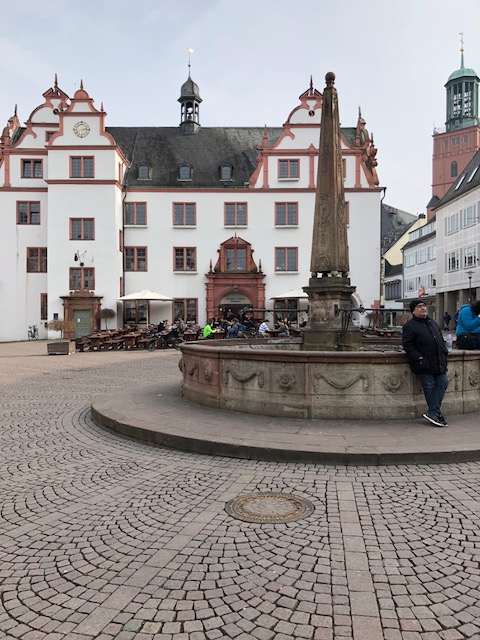 Unfortunately I forgot my iphone, so was not able to take any pics 🙁 I caught the tram down to the town, then the subway to Siegburg. I visited Siegburg in 1991 when it was a Benedictine Abbey. It has an interesting history. The monks left in 2005 & it is now used for various purposes. A small community of Franciscans lives there, so the daily round of Mass & Offices continues. After the abbey I visited the town museum.
Today I catch the train to Frankfurt.
Tues Mar 6
The great thing about Frankfurt (like all of Germany) is that you can hop on a local train & in 40 mins be in another historical city. So I have now visited both Wiesbaden & Darmstadt. After the biting cold of last week it has been nicer this week – perfect for walking. And at this time of the year the streets are not crowded, like in July.
My list still has plenty of places that I want to see. Tomorrow I go to Hannover, where I will spend 2 nights. This gives me a whole day to explore this city which has connections with the British monarchy.
Sat 17
After 2 weeks in a very cold Germany, I flew back to SD for 2 days. My time in SD was occupied mainly with selling my condo, which I bought in 2004. On Friday I accepted an offer by email in Frankfurt & subsequently in SD signed various documents on Monday & Tuesday. I now wait for the deal to be finalised. It was my SD home for 6.5 years & its sale is a significant step, with mixed emotions. I will be glad to pay off my mortgage & repay the parish the loan they gave me – but it is another stage in moving on from my wonderful SD adventure. I flew to Melb on Tuesday a/noon, arriving Thursday morning, & have quickly settled back into the usual routine – beginning with Mass at All SS tomorrow, followed by lunch with parishioners. Now I eagerly look forward to the start of the footy season this coming week!
Log in
Close
Menu